A few years ago, when I was working out for an hour and a half every day, I had rock-hard abs. That all went away for awhile after I decided to start taking med-school prerequisites in addition to working, but today, once again, I possess a tummy of steel.

No, I haven’t spent my first two months of pregnancy doing crunches. Although I had started running daily before I knew I was pregnant, that regimen fell prey to extreme exhaustion and I am still as out of shape as ever. Nope, my hard tummy is all uterus.

In the past few days, while doing my daily routine of petting the baby and admonishing it to stay in there, I’d been noticing firmness in my pelvic area — even on the rare occasions when I didn’t have to pee. I thought it was my imagination until yesterday, when Chris was feeling my tummy as usual and announced to all who had gathered to celebrate Canadian Thanksgiving at his parents’ that he could feel a very definite “pooch.” If you run your hand down my abdomen, it will start out flat and (thanks to my recent lack of activity) rather soft, but then starting below my navel and ending above my pubic bone, there is a round, firm, definite pregnancy pooch. (Either that, or a really stubborn pocket of gas.)

You could see the pooch, too, if I were to wear a close-fitting top. That, however, isn’t happening, since I am only bulging enough to look like I have PMS bloat rather than an adorable baby belly.

Of course that will happen soon enough. The baby has officially graduated from the embryonic stage into fetus-hood today. It has all the same parts (in some form or another) as an older baby and is now gearing up for accelerated growth. If I’m anything like my mother, this little one has nowhere to go but outward, and in another six weeks I will start to look as if I’m smuggling Al Roker in my midsection.

So for now, I will enjoy my rock-hard tummy, which, if I stand up as straight as I can and flex my abs, could almost pass for one that hasn’t been co-opted as a baby apartment.

And without further ado, here are the Week 10 belly shots: 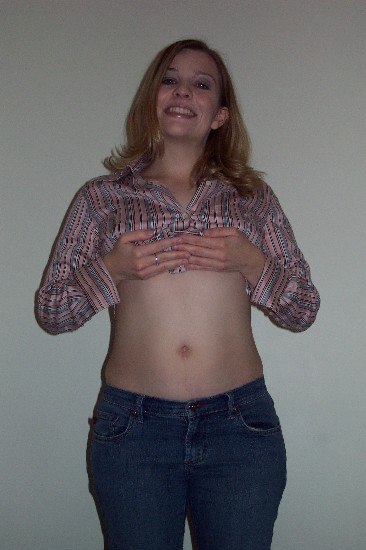