There’s nothing cuter than watching a baby wave “bye-bye” or getting a toddler to slap someone a high five. Unfortunately, that kind of thing is beneath my first two. Maddux in particular would master a skill only to abandon it the minute it was polished to perfection. “I’m nobody’s circus monkey,” she seemed to be saying.

So it came as quite a surprise when Thomas started doing all those adorable little parlor tricks we parents so enjoy. I had all but given up on teaching the usual cute baby tricks to any of my little iconoclasts when, out of nowhere, Thomas began waving “bye-bye” around the seven-month mark. And once he got really good at it, instead of retiring at the peak of his awesomeness, he graciously continued to oblige us by waving each and every time the words “bye-bye” were uttered.

Just for kicks, I decided to teach him high-fives, which I doggedly taught the other kids despite the terrifying flashbacks of Michelle from “Full House.” And within a few minutes, Thomas was high-fiving people like the most adorable little circus monkey you ever did see!

So enamored is my wee son of performing adorable tricks for the adoring throngs that his first confirmed words were “Clap, clap, clap!” (Seriously. For the longest time, he only cried “Mama” in his room when he was put down to sleep, which could be chalked up to coincidence.)

At a year old, he’s a clapping, waving, high-fiving bundle of eager-to-please cuteness who will happily make semi-appropriate animal noises when we’re reading books and will perform any pieces from his repertoire whenever we ask. It’s AWESOME!

Of course, when he is older and has more words, he will probably tell us that he was the poor little neglected youngest child. He’ll tell us (and his therapist) that he had to stand on his head to get any attention at all. But right now, he’s the cutest little circus monkey a parent could ask for! 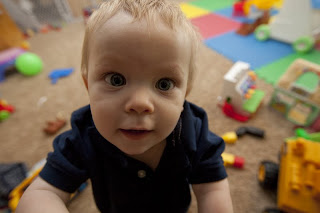