Every time the seasons change, dread fills the pit of my stomach. You see, as dear and sweet as James is and as much as I love my little guy, he is an absolute horror to dress.

Last fall, when I began buying long-sleeved shirts for James, he fiddled with the sleeves — vainly attempting to rend the fabric from his arms — and, after some angry flailing and breathless screeching, collapsed the floor in an epic tantrum. (Can I use the word “epic” if it happens every second day? Sure I can, because now that all the semi-literate teen-age masses have discovered “epic,” it’s super cool to use and abuse the word.)

Anyway. Eventually, after about three days of half-hour tantrums, James accepted the fact that he was going to wear long sleeves. (His agreeable attitude, however, did not extend to jackets, sweaters or windbreakers of any kind; he wore his only on the few days when it dipped beneath -20 — yes, you read that correctly, I said MINUS 20 — and only after much wrestling and snot and tear production. I was hoping that would change this year. Thus far, my hopes have been dashed.)

Then came spring. Do you think James was happy to go back to shorts and short-sleeved shirts?

The first day I dressed him in short sleeves, he bugged his eyes out, began the all-too-familiar shrieking, and pulled his arms up into his shirt like chicken wings. Then he pushed them back out and began wrenching his sleeves down, trying to get them to cover his wrists. A few weeks later, when I tried shorts, James was so insistent on covering his shins that he accidentally depantsed himself.

Since he’d had the most adorable pair of leather sandals the year before, I’d bought very similar ones (and matching shoes for Thomas, of course) for this past summer. Now, I should have known this was a terrible idea because the only way we can get James to accept new shoes is to arrange for the old ones to mysteriously vanish overnight and be magically replaced by identical shoes in the next size up. But determined to enjoy the adorable sandaly cuteness another year, I brought out the new shoes anyway. James freaked. I balked. He remained in his sneakers for two months, until one day I showed him Thomas’ matching sandals. Then he wanted to wear them.

Of course, the sandals and summer shoes turned out to be my undoing. I went through a lot of trouble this spring to get James accustomed to going sockless with his deck shoes and sandals (going without a jacket I can put up with, but socks and sandals I cannot abide!). After a summer without socks, you would think he’d be glad to put on his warm old friends, right? Wrong! Last night, Chris bought James and Thomas a few packs of matching socks — matching! He can’t resist matching, right? Wrong again. James hardly so much as saw the socks before he began waving his arms and crumpling his cute little face into a comically exaggerate frown. “NO SOCKS! NO SOCKS!” he wept, threatening to drown us all in snot.

This morning, after we got James dressed (LONG SLEEVES? NEW JEANS THAT ARE THE SAME BRAND AS MY OLD ONES BUT A DIFFERENT THICKNESS OF FABRIC? NOOOOO! HOW CAN I RIP THESE THINGS OFF ME?!! I’M MEEEEELLLLLTING!!!!), Chris somehow managed to lure James into the laundry room where he attempted to put on the Evil New Feet-Trappers.

“No socks! NO SOCKS!” James wailed, screaming for all the world as if Michael Myers was lumbering toward him with a gleaming butcher knife. In the interest of logistics, Chris strapped James into his carseat and forced James to do the unthinkable — wear socks in mid-October. James was heartbroken for a good 45 minutes and had another ridiculous sock-related meltdown at the gym for good measure.

Of course, by naptime, he told me proudly, “I wearin’ my socks!”

We’ll see whether he does tomorrow. 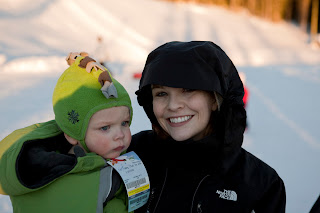 James plots the demise of the inventor of the winter coat