If things had gone according to plan, James would have turned three during the first week or two of January. As it happens, James has always done things on his own timetable, and he turned three in the last week of November, five weeks ahead of schedule.

His term in utero was not the easiest — I was on partial bedrest for the first 10 weeks and on full bedrest for almost all of the final two-and-a-half. After a partial placental abruption at 32.5 weeks, I spent several harrowing hours wondering whether he had survived at all. I’m not sure I dared even to breathe until 7:15 a.m., Nov. 28, 2006, when he was ushered into the world at exactly 35 weeks’ gestation, pink and healthy and beautiful and squalling. (James garnered a near-perfect APGAR and weighed an impressive 5 lbs. 12 oz. at birth!) He had a few small holes in his heart — which were unrelated to his prematurity and were well on their way to closing up when last he was checked — but he fed well and by the age of six months, he was as roly-poly a baby as you could imagine.

The thing about preterm babies, of course, is that you can’t fixate on developmental milestones. Some infants catch up right away; some catch up after a year or two. James’ development has always been a little baffling. He sat early (before 5 months’ gestational age) but walked so late we were just about to dial the pediatrician when he finally began toddling around at 19 months. He figured out how to roll a car before he could sit, but up until recently did not engage in any kind of cooperative or pretend play. And this summer, at 2 1/2, James was still not saying much, unless you count babbling, parroting, and yelling “Digger! Digger! Digger!” We knew he would be hitting some milestones later, but when his 22-moths-younger brother was slapping high-fives before James — and rapidly catching up in vocabulary — we were pretty certain it was more than just an issue of being born 5 weeks ahead of schedule.

Because of these things (and other things, such as his many and outrageous meltdowns, his reluctance to socialize outside his family, and his habit of sorting and lining up all his vehicles rather than actually playing with them) he’s been referred for an evaluation for a high-functioning form of autism.

However, as with his gestation and his early milestones, James does things at his own pace. Not long before his third birthday, his speech went from 90 pecent gibberish to 50 percent gibberish, and he began using an amazing amount of new words. It’s as if that language explosion “they” say to expect at 18 months simply waited an additional 18 months to happen. Instead of screaming like a pig at slaughter and flinging himself on the floor of Maddux’ school — based solely on the fact that the first time we visited, he was in a stroller, and that is how it forevermore should be — he now trots cheerfully down the hall. Instead of lurking in the door and staring (and shrieking and pushing the teacher when invited in), James will now scurry into the room, sit on his favorite couch, sort some blocks, and insist on hugging that same teacher ‘goodbye’ as we leave.

Before November, James had said “I love you” to me exactly twice. Now he says it at least once a week (fishing for it still doesn’t work, alas!). Before Christmas, he played exclusively with wheeled toys, and never pretended they were doing anything other than driving across a room or around a track. Now, he plays with pretend food and hockey sticks and even — if you catch him in the right mood — his animals (although they don’t interact with each other — they’re kind of like vehicles with legs). Today, I caught him pretending to fuel his magnetic trains.

In the past few months, he’s begun potty training, learned to count to three, and mastered most of his colors and a fair amount of animals. He made a friend of sorts at Maddux’ preschool (one who attacks him with kisses, actually, but at this point I’m not going to be choosy!). And yesterday, he finally agreed to go to a daycare at a new gym — a biggie, since we’ve been driving 40 minutes round-trip to our old one to provide him with continuity after our move seven months ago.

There are a few sticking points, to be sure — such as his refusal to wear a jacket even at -15, a slight vocal tic (which diminishes a bit more each week), and his unparalleled fear of unfamiliar footwear. But we’ve made great strides since the day early last year when I brought him to swimming class and he a) insisted on bringing his favorite toy bus IN THE WATER and b) screamed himself snotty until we left the pool because, being in the water as we were, he was unable to roll said bus.

Of course, whatever his developmental timetable turns out to be, every time I hold my little son my thoughts are drawn back to that gut-wrenching 10-minute ambulance ride in 2006, during which I was sure the near-term baby I felt sloshing against the roof of my belly every time we hit a bump had surely died. At least several times a day, as his small arms wrap around me and he asks me to sing the “sunshine song” exactly three times (no more, no less), I am profoundly grateful to have this little boy at all.

Perhaps he will “outgrow” his developmental delays and grow up to be the next Einstein or Edison or Gates (three oft-cited examples of probable Asperger Syndrome). Or perhaps he’ll be living in our in-law suite at age 45 and still subsisting entirely on waffles, steak and cheddar bunnies. Either way, we are lucky to have this happy, healthy kid — and his siblings — and we’re proud of all their milestones, whether on the experts’ schedules or on Jamesy Time. 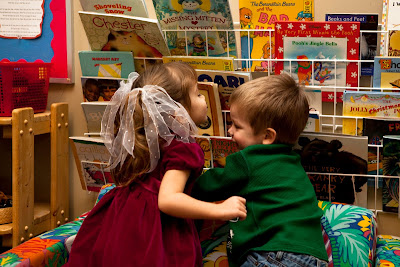