When I pulled the hockey sticks out of storage and wrapped them, Chris told me it was a bad idea. We’d bought them on sale at Costco when Maddux was about 18 months old and James wasn’t even holding up his own head, let alone a hockey stick.

Before the kids were big enough to interact with each other, we had visions of our adorable tots playing backyard games of ball hockey. When the kids finally did interact with each other, we revised that vision. The new vision looked more like a cross between Jai-Alai and a gladiator deathmatch, so into storage the toddler-size hockey sticks went.

But a few years had passed, and the older kids were big enough to know that high-sticking gets you a lot of time in the “time-out” box. Plus, what we’d managed to scrape together on our recession-era Christmas budget was looking pretty sad when we laid it all out to wrap.

“I’ll probably regret this,” I admitted as I surveyed the assortment of weaponry I was about to bestow on our band of tiny hooligans. But Maddi had already spied the sticks in the furnace room, so I was committed to the process.

When the paper came off the ball-hockey set on Christmas morning, the boys’ eyes lit up. “Sockey ball!” James giggled. No matter how many times I tell him that we play “hockey” with a “puck,” James will always insist that Canada’s national winter sport is sockey ball.

Ever since they were tiny, the boys have enjoyed watching sockey ball. James enjoys sockey and baseball in equal measures, but Thomas has a particular love for the ice. Before he was sitting up on his own, he’d watch hockey games with his daddy, his little eyes tracking the players and the puck. He’d squeal at the action and pump his little fists until the commercial break, at which time he went back to being a normal infant.

When Thomas was about five months old, we took all three kids to see the local WHL team play. Guess who started jumping up and down and squealing when the players skated onto the ice? As his siblings sat in their near-rinkside seats, somewhat bored, our not-yet-crawling baby tracked the action, waved his arms and jabbered gibberish in an urgent voice to the players. When we left at the end of the first period because Maddux and James were getting tired, Thomas howled his disapproval.

So now that Thomas was walking, I figured it was time to break out the hockey sticks. Insane, I know. Chris and I fully expected those sticks to be in permanent time-out by noon Christmas Day. But the kids proved us wrong. To be sure, there have been a few checking and high-sticking violations (for those who aren’t hockey fans, that means the boys have used their sticks to whack bodies and heads instead of the puck a few times).

However, this is what usually goes on: Thomas picks up a stick and holds it exactly like an NHL player. James does the same. If the puck (a blue ball in their case) is available, James will move it around with his stick while Thomas roars with laughter and swings his stick wildly (it’s as big as he is, and he’s new at this whole walking thing).

In the very likely event that the puck has gotten lost behind the couch, the boys will simply run around the playroom with knees slightly bent, sticks out, and their super-intense pro-hockey “game faces” on. James’ “game face” is concentrated scowl, with a slight flare of the nostrils, his eyes a few feet ahead of his stick on the “ice.” Thomas’ “game face” is a little different — his eyes wide, alert, a little crazy, and he’s usually jabbering some baby trash talk in James’ direction.

And on Saturday nights, we can always count on one thing. After dinner (usually pizza) and before bedtime (usually a bit late), the kids jump on the bed and watch “Hockey Night in Canada” with Daddy. Maddux, who’s going through her (realllly long) princess phase, doesn’t usually watch long, but if it’s Hockey Night, the boys happily watch the game until they’re dragged off to bed wailing “I watch sockeeeeeyyyy!”

Tonight, because the Canucks are losing*, the boys are celebrating Sockey Night downstairs with their own sticks. They’re good little boys and have watched enough hockey to know how the sport is played, so my refereeing skills are needed much more rarely than we thought when I pulled those sticks out of storage.

On the rare occasions when a boy raises a stick over his head and begins chasing the “other team” with wicked glee, all it takes is the question, “How do good little hockey players hold their sticks?” Down go the sticks. On go the “game faces.” It’s Sockey Night in Canada. 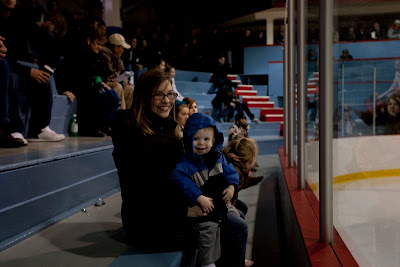 * The Canucks did not, in fact, lose and the kids got to watch the recorded version of their win after dinner. There was cheering and arm-pumping and the usually-coordinated Thomas was so excited that he took a header off the end of bed for the very first time. (Don’t worry, he was fine and went right back to jumping on the bed and cheering on the Canucks!)