Last September, on the first day we brought Maddux to preschool, James refused to enter the door. You see, the last time we had visited the school, he’d been sitting in his stroller. So, naturally, it was to be assumed that if his feet touched the floor inside the school, they would disintegrate.

For a week, James would scream at the entrance to the school until he was carried across the threshold, and would persist with such vigor that he drained his sinuses and tear ducts in 5 minutes flat. After a week, he obliged me by dragging his feet very reluctantly into the school, but would wait anxiously outside the classroom — as if it were filled with high explosives — while I got his sister situated. Then he ran for the exit as fast as his little feet would carry him until, outside the school, he gulped in lungful after heaving lungful of freedom.

Finally, sometime approaching November, he decided it was safe to enter the classroom as long as he hovered in the doorway, ready to bolt at the first sign of … whatever. (The catalyst behind his shrieking dashes to freedom usually was a request by Maddux’ teacher for a handshake.)

But as weeks turned to months and months turned to seasons, James began venturing farther into the classroom and closer to the teacher. After a few holiday parties, he decided that perhaps the classroom floor was NOT covered in hot lava, after all. And sometimes, with a bit of prompting, he even agreed to shake hands with the teacher.

For a few months now, James has been prattling away about how he’s going to go to preschool and eat cheddar bunnies and play on the playground with Gabriella (an effervescent little girl who relentlessly chases and kisses him). All that stood in his way was potty training, which we did over spring break.

I will admit, in light of his previous track record of school-related freakouts, that I was a little nervous about his first day. Would he hit the teacher when she tried to guide his hand at name-writing time? Would he shake hands, or run away? Would he follow any classroom rules at all?

The preschool day started with an inauspicious tantrum. Those who know James are well aware that he will scream until his nose bleeds if he is made to wear a coat, even at -20. And I believe we’ve covered what happens when he has to try on new pants. So, think tornado siren, and triple the noise. Think 18-month-old at vaccinations, and triple the tears and snot. Throw in some kicking and flailing. That is how James felt about his school clothes.

“OK, Maddux, we’re going to school now,” I said casually. “James has decided to stay home with me and baby Thomas and have a nap.”

Still screaming, and streaming snot and tears, and trying to wrench his clothing off, James wailed, “I NOT STAY HOME. I go school and play on the big playground!”

A daycare helper held Thomas as I strong-armed James into his carseat and gave him a Wet One to wipe his snot, and away we went. Did I mention this tantrum occurred at the gym? Those daycare girls are saints!

Luckily, the tragedy of new clothing was swiftly forgotten (well, 45 minutes and two car rides later) and by the time we alighted from the SUV, James was trotting at top speed toward the entrance. With just a minor stop for a quick picture of an impatient James, we raced to the preschool classroom, where James immediately filled his personalized mug with water and opened his much-anticipated snack.

Alas, in his haste to enjoy his snack, James neglected to use the toilet. (If we’re going to be frank, it was not so much neglected as flatly and angrily rejected.) As I was observing snacktime, James shrieked: “I go pee-pee!”

And go pee-pee James certainly did. His clothes were drenched to the socks and shoes. There was nothing left to put in the toilet. Oh, well. You can’t spell “preschool” without “p,” right? So, 15 minutes into his first day of preschool, James was changed into his backup outfit of jeans and long-sleeve T-shirt.

He returned to his table — and immediately spilled a very full mug of water right down his front.

I asked James, now damp from chest to knees, whether we should leave.

“No, I stay and eat my bunnies!” he insisted bravely. “I play on the big playground!”

And so we stayed. He unrolled a mat and took down a basket of blocks. Since he was in his last change of clothes and they were already wet, I made sure he used the toilet every half-hour. In all the peeing and water-spilling, we hadn’t written his name out, but I wasn’t going to mention that to his teacher. Rectangle time would be challenge enough, I figured.

But apparently, I’d underestimated James. One of two other new kids, a very spirited European boy who sat next to James, was running and bouncing about during rectangle time while James, against all odds, sat mostly in his spot. Facing away from the teacher and everyone else, mind you — but hey. It’s James. I was just happy he wasn’t squealing like a pig at slaughter. He even turned around halfway through and started participating in the story (only in preschool would students be asked to periodically scream at the top of their lungs … which is why I am not a preschool teacher).

At the end of rectangle, all the kids sat in a line on the floor, waiting to be dismissed. James, as usual, needed a little more guidance than most, but sat behind his new friend after some prompting.

It was then, at 3:15 p.m. — by which time he has usually already been napping for an hour — that I tried to put James’ backpack on him.

He screamed as if I were trying to strap a dynamite vest to his body, miraculously hurdled over three children despite his usual lack of anything resembling coordination, and blazed out the door and down the hall. I caught up to him at the heavy double doors at the front of his school and prodded him back to the classroom, where he opted to wait outside until his sister was dismissed, casting a wary eye upon the offending backpack.

As the teacher said good-bye to all her students, James sweetly shook her hand.

And then he trotted proudly out the door, deeming his school day a resounding success. And I had to say, considering the beginning of the school year, I agree. 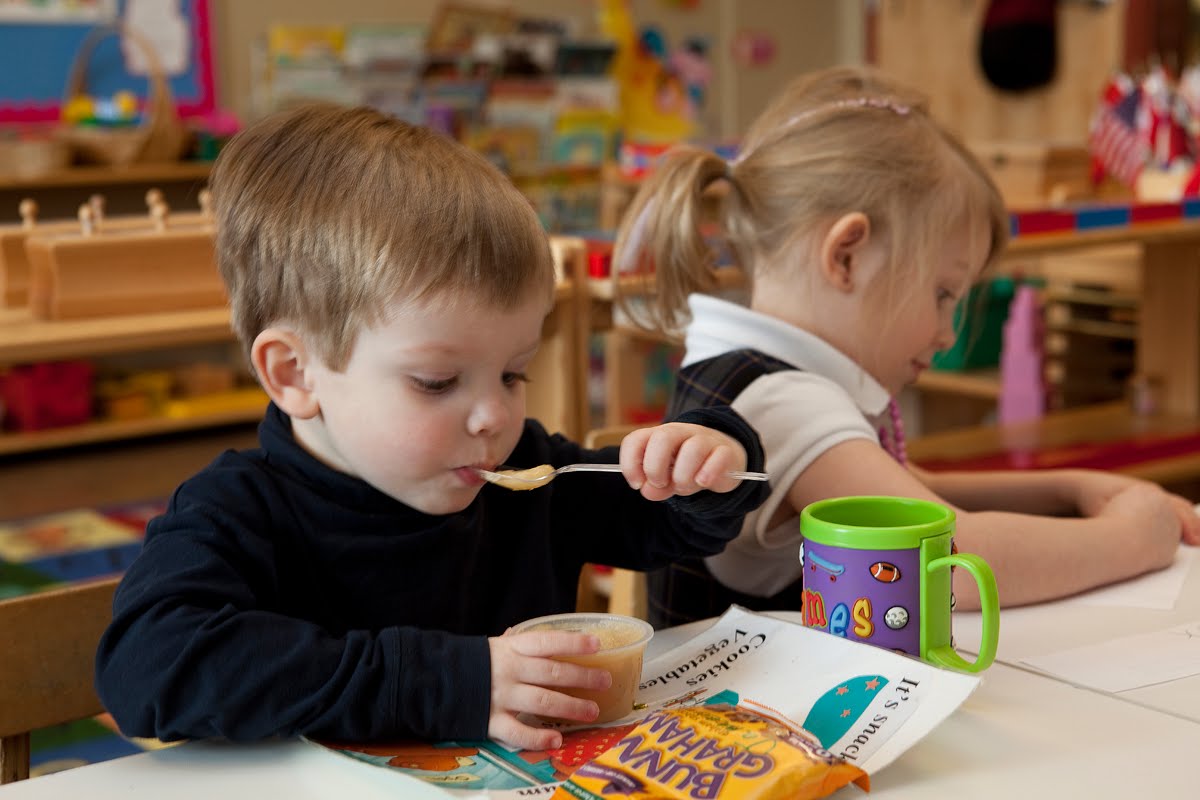 James shares a table with one of his favorite classmates, Maddux