When people talk about getting a good night’s sleep, they often use the term “sleeping like a baby.”

Millions of new parents the world wide beg to differ, I’m sure. But one thing is certain: The wordsmiths of the world will never refer to enjoying a restful slumber as “sleeping like a pregnant woman.”

Now, if you ask Chris, I get a fabulous night’s sleep every night of the week. While he rouses from repose after a mere six or seven hours, I slumber on for an additional six, giving me a nice round 12 hours.

In theory, 12 hours of sleep is a dream come true. Last spring, when I was surviving on 5 hours or fewer per night while juggling full-time work and school, I doubtless would have derived untold energy from such a wealth of rest.

In reality, however, 12 hours is barely sufficient for a pregnant woman. Between the moment I drag myself out of bed and the moment I hit the sack, I spend my 12 waking hours yawning and rubbing my eyes, forgetting simple things and getting tired walking up the stairs. In short, I am worse than I was as a bleary-eyed, time-strapped journalist/premed student.

The insomnia that plagued me even when I took sleeping pills to get that crucial five hours has become a thing of the past. My head hits the pillow and I’m out.

Given the duration of my slumber and the fact that it is not marred by insomnia, it would seem that I am getting 12 glorious, restful hours. But that’s before we factor in the ever-so-significant fact that I am pregnant.

What does this mean for my 12 hours of repose? Well, first, I am sleeping with a giant body pillow between my legs in order to stay on my side as the experts recommend. Can you imagine the scope of the planning and effort necessary to accomplish a simple middle-of-the-night position shift? Naturally, since my hips constantly feel like I’ve just come up from doing the splits for five solid days, these position changes happen several times a night.

When you’re pregnant, guess what else happens several times a night? That’s right — we preggies must answer the call of nature at least once per two hours, even if we quit ingesting fluids at 7 p.m. So add anywhere between 6 and 11 late-night trips to relieve our suffering bladders.

As if those potty breaks and repositionings weren’t enough, add to that the disturbing dreams caused by a potent cocktail of hormones and the extra REM sleep pregnant women get. Whether it’s the usual nightmares about being held captive, weird pregnancy dreams of having “my” children threatened by their dad (who in this dream is, oddly, some creepy drug dealer who roomed with a friend in university and certainly someone I’d never date, let alone have two kids with), or even pleasant dreams about my cute, adorable actual baby and its perfectly nice, nonthreatening dad, these dreams are so vivid that they often manage to wake me up.

So while I do get 12 hours of sleep, it’s definitely not unbroken sleep.

Now, for all we know, babies also experience joint pain and nightmares, and I think we can all agree that their bladders are easily as tiny as that of a pregnant woman (although we don’t have the luxury of being allowed to pee in the bed — as much as some of us have contemplated it).

However, since newborns supposedly sleep 16 to 20 hours out of the day, and they usually look pretty comfy and happy, I’m willing to bet they really do sleep like proverbial babies.

Meanwhile, if anyone thinks pregnant women enjoying a similarly restful slumber, I hope this post will put those fantasies to, um, rest.

And without further ado, here are the Week 17 belly shots! I’m so happy — I finally look pregnant! I guess it was a good thing my parents pushed Thanksgiving forward a week, or my belly would have made the announcement for me. 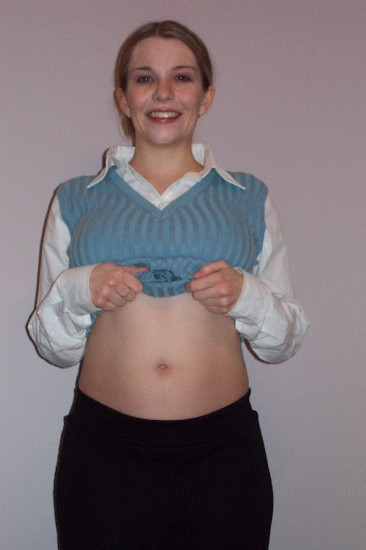 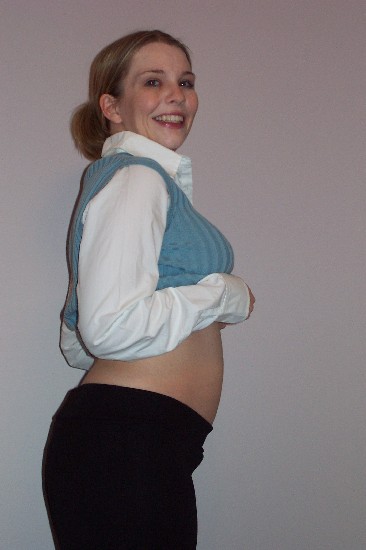