It’s high noon here at the O.B. Corral. Thar’s been a stranger a-trespassin’ on my property. I tried to live alongside the new gal in peace, but lately she’s been stirrin’ up quite a ruckus and one thing is clear: Thar ain’t enough room in my ribs fer the two of us. I give her until May 22. After that, this matter won’t be settled in a gentlewomanly manner. I’m gonna smoke her out of her hidey-hole with the biggest shot of Pitocin in the West.

Yes, folks, the time has come. For months, despite bouts of vomiting, bladder kicks and back pain, my overall feelings about being pregnant have been ones of happiness and joy. But now I am officially ready for the baby to come out. Technically we have another six weeks before Pele is considered full-term, so I will let her stay for the time being. However, I want it on the record that the third trimester is not fun.

Between having all the grace and mobility of a beached whale and enjoying the constant feeling that there is a large shoehorn wedged under my ribs and prying them open like a clam shell, the enjoyment I reap when I feel Pele squirming about is no longer enough to stop me from wishing desperately for a C-section. Right. This. Minute.

You see, our darling baby girl has discovered that if she pushes her wee bum up under my ribcage, her cramped apartment has a bit more room, thanks to the comfy park bench that is my right rib. Put your hand on my belly at almost any time, any day, and you will feel a large, hard bulge right below that rib. That, my friends, would be Pele, with her legs jabbing into my diaphragm and her little butt doing its best to peel my ribs back like a sardine can.

What felt a few months ago like a large goldfish lazily doing laps now feels like a crazed badger tunneling toward freedom via my very tender ribs. Our baby now should weigh about 4 pounds and is likely just shy of 17 inches long. This may not seem like much, but when it’s all applied via a sizable baby bum to a single rib, it’s nothing to sniff at. When I think about twice that much weight being applied to my unfortunate rib in just six or eight weeks, I begin to contemplate having that rib removed pre-emptively.

Or maybe, I think to myself when I have that dream where the kids at the mall are beating me in the torso with baseball bats, the little rib-monkey.

Although we still have to let her incubate a bit, my little pain-in-the-ribs has matured a lot in the last few weeks. If she were born now, she’d almost certainly survive and very likely would avoid many of the medical problems that plague micro-preemies. And in the past fortnight or so, while her lungs and other organs have been maturing, we’ve acquired a car seat, ordered a crib, and managed to start getting her room ready. What just a month or two ago seemed so far away now feels as if it should be a matter of weeks. Oh wait … it is a matter of weeks.

As tempting as an early C-section might seem at times, our little bun is so close to being cooked that we might as well let her stay in the oven a bit longer. Every time I check my bottom right rib to see whether it’s cracked, I tell myself, “Just eight more weeks.”

Now, after 10 weeks, we’ll be renegotiating the terms of her lease.
Wanted posters will go up. I’ll bring in an out-of-town cowboy known by the nickname “Dr. G.” Maybe he’ll rush in with IV bags blazing. Or maybe he’ll take the subtle approach and just divert her water supply. All I know is, after Week 42, that little maverick is never going to set foot in my ribs again.

And without further ado, pictures of my ever-expanding belly as I begin Week 32. 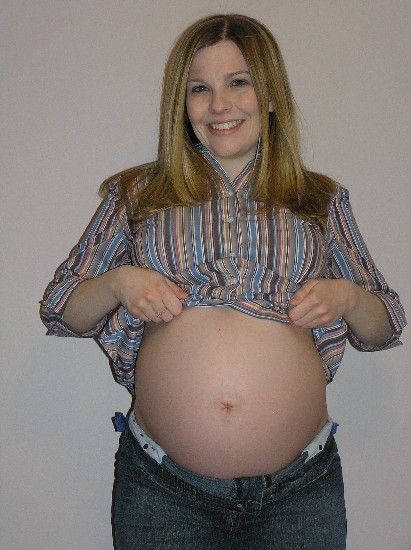 One thought on “Kick the bum out!”