One day recently, Chris pointed out to me that my entries haven’t been as funny lately as they were back in the halcyon early days of nausea, vomiting and debilitating fatigue. On looking at my recent posts, they do seem a bit neurotic, and while some people can be funny when they’re neurotic, like Valerie Harper on “Rhoda,” I’m just incredibly spazzy and annoying, like Calista Flockhart on “Ally McBeal.”

I chalk up this blog’s boringness to two factors. First, humor is usually born of adversity. Look at the lives of our most beloved comedians and you will find poverty, parental abandonment and abuse. (This is why they all die of drug overdoses before their time.) While I was experiencing the miseries of the first trimester, the only way to cope was to laugh about the horrors of being nauseated by ginger, nearly peeing during that first miserable ultrasound, and barfing up painful giant chunks of apple.

Now that I am back to normal again (aside from the occasional feeling that an alien is going to burst through my abdomen), I am much like the comedians who don’t die young. Like Robin Williams, Steve Martin and Jim Carrey, the absence of personal torment has ruined me. I have moved on to “more serious material,” such as kvetching about all the things I need to finish before baby’s arrival.

You know how some comedians really should have died young before they made that really awful stinker of a movie? Well, let’s just say the third trimester is my “Patch Adams.”

The second factor is motherhood itself. You see, mothers are not supposed to be funny. Who among us, as a 12-year-old, did not roll our eyes and try to shrink into the floor when our parents tried to say something humorous? It is, quite simply, unnatural for mothers to be amusing in their own right.

Even as an infant, Pele will know that my attempts to be funny are lame, whereas it will be hilarious when I slip on the freshly-washed kitchen floor and spill boiling water over 60 percent of my body. Daddy gets bonus points for the same, because every baby knows that painful accidents are 10 times funnier when they happen to big, strong men.

However, for me to use my own sense of humor goes against all the tenets of motherhood. As I write this, my body is already releasing chemicals that are rapidly destroying my sense of comedy in preparation for parenthood. Pretty soon, the only things that can draw a laugh from me will be Bill Cosby jokes involving a child, a cardboard box, and how much money is wasted on real toys at Christmastime. And let’s not forget the “hilarious” gab sessions I’ll have with other moms about how kids say the darnedest things.

Besides making me laugh at the world’s most unfunny comedic material, the destruction of my brain’s humor center will make it possible for me to utter, with no sense of irony whatsoever, such grim, well-worn gems as “It’s all fun and games until someone loses an eye,” and “One more peep out of you, missy, and I’m turning this car around.”

My lack of humor will come in handy when the children act up in public. Once upon a time, it was hilarious when everyone in church would fall silent for prayer, only for that void to be broken by a two-year-old saying loudly, “Mommy, I pooped.” Since it was not my toddler, I would turn red trying to rein in the urge to laugh uproariously at the inappropriate (but predictable) timing. However, thanks to the chemicals that are destroying the sector of my brain that processes humorous situations, when Pele does this I will feel only one impulse — the urge to find a new church where nobody knows us.

Not only do I worry about providing her with a bottle that won’t cause nipple confusion and toys that don’t damage her hearing, I worry about her future. Will she inherit any medical problems from her dad or me? If Chris speaks French to her, will it give her an edge later or just delay her English? What kind of TV will she be watching when she’s at her friends’ homes?

And it’s not just the near future over which I have found myself fretting. Already, I have begun to worry about whether she will wind up getting her nail-tech certificate at the local strip-mall college instead of attending an Ivy on full scholarship as her dad and I intend. I worry that she’ll get a tattoo. I worry that she’ll smoke. I even worry about pointless issues of personal taste — that she won’t appreciate good design, will listen to really bad pop music (or, since we are in Canada, we may as well face it — even Celine Dion!), and that she might, at sixteen, ask us to buy her an American car. Heaven forbid it is a Chevy.

Of course, morphing from a funny, carefree individual into a humorless neurotic has its upsides. For instance, everyone else is much funnier now. And our children will not be scarred by the humiliating memory of Mom trying to be amusing.

Plus, I like the fact that, like Chris Farley (except with pregancy chemicals instead of a speedball), I’m leaving at the top of my game.

I’m sure that anyone who sat through “Bringing Down the House” will appreciate it.

And without further ado, the Week 33 belly shots, which prove that not only am I quitting while I’m ahead like Chris Farley, I am also as big around as Chris Farley. 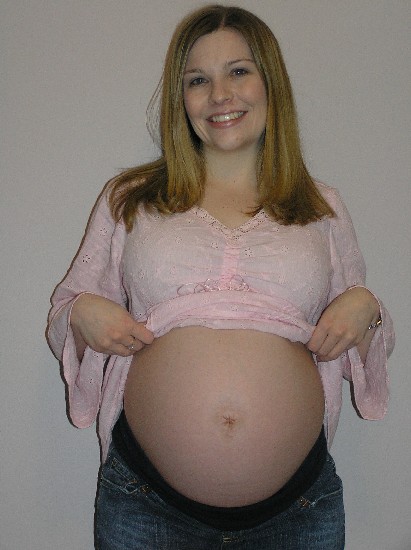 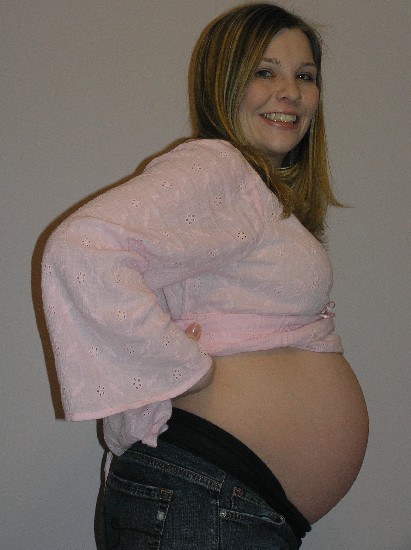