With parents like Chris and me, no wonder our baby is a little mischief-maker. It’s in her genetic code.

Friday morning, Chris came up to check his email, so I got off the laptop and stood nearby, patiently waiting for him to finish his business. Suddenly, fluid started dripping rapidly onto the kitchen floor. Chris, in the thrall of the silicon gods, did not appear to notice. In a voice tinged with panic, I prodded, “Honey, I’m leaking!”

“Did your water break?” he asked.

“No, it was just this Ziploc bag I’ve had down my pants for the last hour,” I said. “April Fool!”

But Chris got me back 10 times better yesterday.

All week long, I’d been looking forward to Sunday lunch with his parents. Chris’ friend John and his girlfriend Rose were coming up to visit, and we were going to have crepes at the parents’. Jan makes the world’s best crepes, so I was disappointed for multiple reasons later in the week when Chris told me John and Rose would not be able to make it.

But when Chris informed me that we would still be having crepes, I breathed a deep sigh of relief. Only fools dare to separate a pregnant woman from promised breakfast confections!

Yesterday, Chris woke me up with McDonald’s pancakes and then drove me to his parents’ for crepes. I should have been suspicious, but then Chris is a man who can (if necessary) eat two full meals in three hours. I should also have been suspicious when he was acting all time-conscious, since, if being late made one fashionable, Chris would be Karl Lagerfeld. But since he’d told me the Yankees-Red Sox season opener was scheduled for 5 Eastern time, I thought nothing of it.

I should have been even more suspicious when he followed a painfully slow pickup to his parents’ house instead of zipping around it. When we pulled into the driveway and it was filled with cars, red flags definitely should have been raised. But then again, Chris’ mom makes excellent crepes. Why wouldn’t the whole town show up?

“I think your mom must have been messing with us when she told us she’d just woken up and hadn’t started the crepes,” I remarked idiotically.

“Maybe everybody’s messing with you” was Chris’ cryptic reply.

I walked into the kitchen and when I saw a table full of desserts and NO CREPES, I suddenly realized what Chris had meant.

So our little girl has two incredibly sneaky parents (and one sneaky Nana, too!) and now, thanks to the Wild Women of Oliver and some sweet people from prenatal class, she is also spoiled absolutely rotten.

The wee rib-kicker is now 35 weeks plus one day along, which means that in 13 days, she will be considered term, and five weeks from now she will be overdue. With my giant belly and our now-full nursery, there’s no getting around the fact that we are going to be doing nighttime feedings very soon!

And here’s what you’ve been waiting for — the Week 35 belly shots: 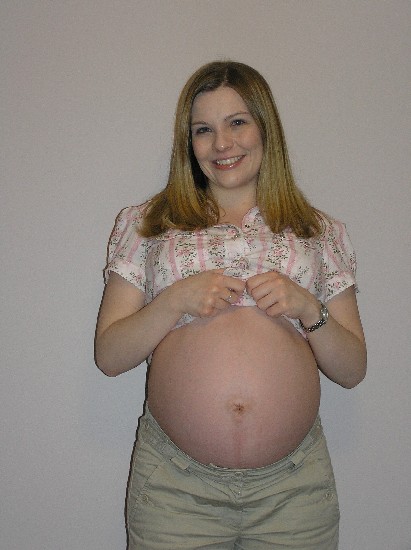 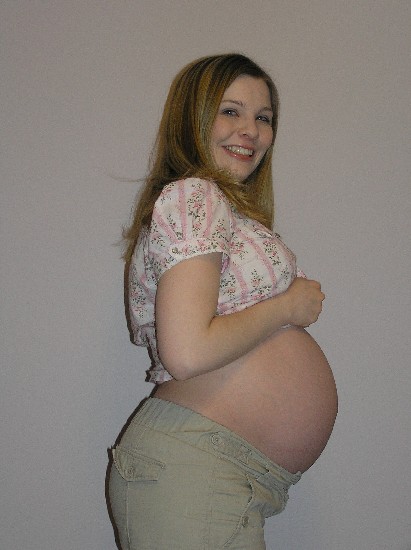