In the first trimester and early second trimester, when my days were spent sleeping, forcing down food and barfing, each of those days felt like an eternity. The weeks dragged by so slowly at the beginning. And each of those weeks meant exciting developments for our little fetus — first a heartbeat, then fingers and toes, and later on, the development of taste buds and hair follicles. Then, finally, I felt those first little tickles of movement.

After I felt the baby move, we entered the second period of time — the one I barely remember because it flew by. No longer sick and now able to monitor our wee one’s well-being simply by lying down and waiting for her flutters, I had boundless energy, a great appetite and a perennial good mood. The baby’s organs all were formed and really all that was left was growth and development, so each week was a little less exciting.

Suddenly, weeks were over before they began. Sure, I got bigger and bigger — as did our little daughter — but with few big physical milestones or major discomforts, it was much like not being pregnant at all (except, of course, for a little frantic nesting behavior).

Even as the baby became viable and turned head-down and I became more enormous and uncomfortable with each passing day, the weeks flew by. Mostly, I think, because the baby had nowhere to sleep.

Then, around Week 31, the third time period began. As happened during the first several months, the weeks in these last months have been dragging by.

With the room furnished and the baby big enough to survive outside the uterus, it’s now just a matter of weight — and waiting.

Each week is spent ticking off days — not toward delivery, which I view with a mixture of anticipation and dread, but toward the next chiropractic appointment.

Each day is spent ticking off hours. How many hours before my indigestion is gone and I can eat again? How many hours can it possibly take to pack a simple labor bag? (Lots, when it takes you five minutes to haul yourself up and waddle from one room to the next!) When I’m up and around, I want to be in bed where my belly is free from the pull of gravity. When I’m in bed, I can’t wait to get out so my arms will stop tingling.

Each of those long hours is spent ticking off minutes (which, these days, are about as long as hours used to be). Minutes it takes for my swollen feet and aching hips to carry my giant, heavy body to the bathroom. Minutes it takes to lift myself from lying down to a semi-sitting position and catapult my enormous girth out of bed. Minutes between Braxton-Hicks contractions. Minutes for the Gaviscon to start working. When I’m in the car, I count the minutes until I can get out and stretch those screaming back muscles. When I’m shopping, I count the minutes until I can get back in the car and rest my throbbing, sausagelike feet and support the leaden beach ball that is my belly.

Needless to say, while I am happy there are only three weeks left, I am worried about how long those weeks will feel. Can three weeks seem longer than an entire trimester? I worry that they will.

In other, less depressing news, the baby is now considered “term” and my labor bag is almost completely packed. To those relatives who received emails informing you that I had gone into labor, sorry about that! Chris was writing a little application that would automatically send out emails and while testing it, he accidentally hit the wrong key. Oops! Wishful thinking!

And here are the Week 37 belly pics, which, according to my doctor, may or may not be the last shots of my expansive, baby-filled midsection. 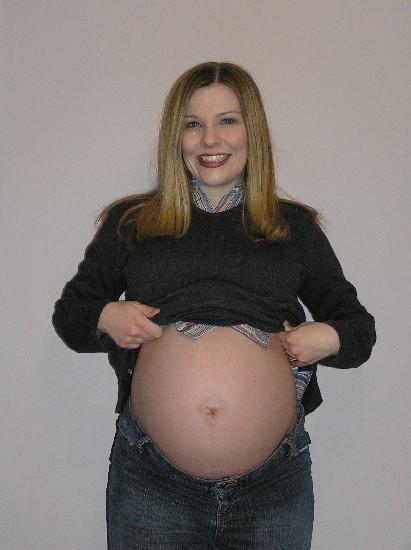 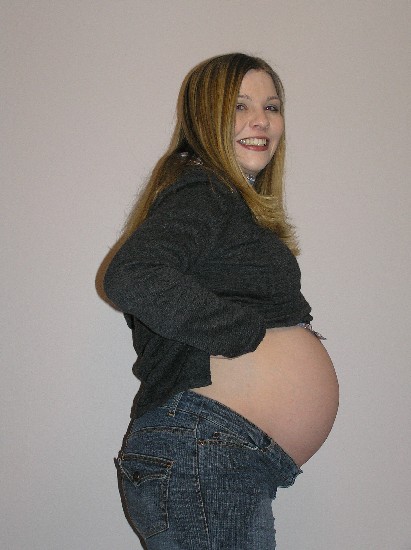