As most parents will tell you, it’s not uncommon after birthing a child or two to find oneself uttering phrases one previously swore would never pass one’s lips. “Because I said so” and “Not while you’re living under my roof” come immediately to mind.

However, there are plenty of phrases we never imagined we’d utter at all — not because of any philosophical objection to them, or the negative emotional connotations based on our own upbringings. It’s just that some of the things kids come up with boggle the imagination.

For instance, I never imagined that an occasion would present itself in which I would be forced to say “No riding the baby.” And yet, it happens. On a daily basis. (Why IS it that babies are so immensely fun to ride? And why, oddly, do they not seem to mind terribly much that they are holding 30 pounds of bouncing 2-year-old on their backs?)

Since my kids are only 4, 2-and-three-quarters, and 1, I’m sure many more things will come out of my mouth that I never imagined would need to be said. But here are a few tidbits from the not-far-distant past:

“We do not paint with poop!” (Said every naptime and many mornings for a good eight months. One day, it happened three times and I ran out of sheets. *Cry*)

“Hairbrushes do not go in the VCR.”

“You cannot climb in the baby’s Exersaucer, especially while he is sitting in it.”

“We do not use markers on our brothers and sisters.”

“We do not use the Barbie bathtub to bring water into our room and pour it everywhere.” (We’re talking probably a half-hour of repeated trips during naptime; it’s lucky the second floor did not collapse after the resulting deluge.)

“Only Mommy is allowed to change the baby’s diaper!” (Technically, volunteers are appreciated, but not 3-year-old volunteers who fail to ask first.)

“Who ate the top half of all these yogurt cups?”

“Why are all your barrettes and clips in the toilet?”

And the list goes on, and on, and on. I will grant you that some of these statements have periods at the end of them when, in real life, their utterance was followed by a fair number of exclamation points. The remarkable thing is that I get so many compliments on how well-behaved the kids are, and what fabulous manners they exhibit (except, of course, when we are at the mall past naptime and the mirror-licking commences, always at the fanciest — and quietest — stores).

With all the admonitions against using babies in lieu of trikes and human waste as an artistic medium, “Well, I’m not (such-and-such kid’s) mom, and you’re not doing/getting (X forbidden thing)” doesn’t seem so bad anymore. 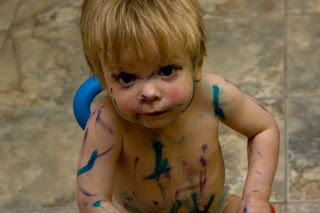