Every little girl dreams of her wedding day (except for me — I always dreamed of becoming a 6-foot-tall Russian double agent outfitted in a black PVC minidress, thigh-high boots and a chic ebony bob, but that is neither here nor there). Since Maddux has decided to wait until her sixteenth birthday to tie the knot with Prince Phillip from “Sleeping Beauty,” the next-best thing to nuptials of her own is being a flower girl in someone else’s wedding. Luckily, Uncle Gary and Aunt Elizabeth gave Maddux the opportunity of a lifetime last week, buying me at least another 11.5 years before I have to worry about sending my baby daughter down the aisle in a white dress.

Ever since Elizabeth asked Maddux to be the flower girl earlier this year, our little princess has been beside herself with anticipation. She practiced swanning about in her dress-up clothes (being sure to lift her skirts daintily whilst going up stairs or curtsying). She rehearsed the strewing of the rose petals in her bedroom with her bridal dress-up set, in the playroom with tiny bits of torn-up construction paper, and at her school playground with leaves. She was so enamored of the hairstyle we planned for the wedding that she begged me to put her hair up “in a Tinkerbell bun” for school one day.

As if being a flower girl wasn’t exciting enough, a masked ball was to follow the wedding. Now, if you are a 4-year-old girl who devours princess movies and fairy-tale books like a dragon eats knights, a ball is basically The Most Important Event You Will Ever Attend. Maddux occasionally tells me she wants take walks in the woods in the mornings, because that is when you are most likely to encounter princes. Just THINK of all the prince-meeting opportunities an actual ball presents!

On the day of Gary and Elizabeth’s wedding, Maddux got all dolled up in her flower-girl best and sashayed around the opera center (this sashaying, I should add, was done on pretty much zero sleep, so we are all incredibly lucky that her lovely white dress did not wind up going through the fountain out front).

Upon receiving each of the 70,000 compliments she got that night, my little daughter told people, “Thanks. I’m the flower girl, but you can just call me Flower.” And right before Maddux headed down the aisle, she told Elizabeth, in her most let’s-get-down-to-business voice, “I’m going to go spread rose petals now!”

Maddux very methodically walked down the aisle spreading rose petals, and, upon reaching the end of the red carpet and discovering that there were still flowers left in her little basket, she very conscientiously turned the basket upside down to ensure that the petal-scattering job was done to the fullest extent.

Now, since it was basically bedtime and we all know Maddux needs her sleep, I had but one requirement for my little flower girl. Fidgeting and dancing and looking around were pretty much expected at this point.

“Maddux,” I told her the day of the wedding, “Your job is to smile and look pretty. You don’t need to say ‘hi’ to anyone. But no matter what, remember NOT TO PICK YOUR NOSE.”

Naturally, during the ceremony, Maddux wiggled around. She fidgeted and hopped from foot to foot. She played with the bridesmaids’ feather fans and swung her basket around like she was a helicopter about to take off and tried to engage people in conversation. She waved to all and sundry. (I saw all this thanks to the complimentary baby-sitting. Otherwise I’m sure I would have been shushing and rocking and pacifying two bedtime boys. So thanks, Gary and Elizabeth!)

“That’s OK,” I told myself, while putting a finger up to my lips and making the universal “Shhhhhh!” sign, which was met with gleeful waving. “At least she is NOT PICKING HER NOSE.”

Then she picked her nose.

Luckily, she was the cutest little nose-picking flower girl there ever was. She smiled the whole time and was charming all night long. Hardly anyone noticed that her third knuckle was in her sinus cavity and I’m pretty sure there is no photographic evidence of the gold-mining expedition.

After the bride and groom were married and sent back down the aisle (YAY!) we convened for the masked ball. Maddux was among the first people on the dance floor.

“Do you think you’re going to meet a prince?” I asked her.

“No, Mommy, you’re so silly,” she told me. “Princes don’t marry little girls.”

But she did want to dance. Until midnight.

I figured after 20 minutes, she’d tire out. After all, it’s not as if they have cardio classes for 4-year-olds. (Later it occurred to me that the reason they don’t have exercise classes for 4-year-olds is because kids that age have about 10 million times more energy than grown-ups and that they would probably find a Zumba class quite restful.)

Maddux deigned to dance with me for awhile, but quickly deduced that I am a wretched dancer, so she kindly told me, “Mommy, I need to dance by myself. You can go sit down now.”

She danced with my brother Gary, which was adorable (brides and grooms are celebrities when you’re 4, so he was not sent to sit on the sidelines). Then she danced with a few other people, but sent most of them away.

For a good hour or 90 minutes, she danced in circles with one hand over her head like a ballerina. Everyone stopped trying to cut in after awhile (since she repeatedly insisted she worked better solo), so at the end we only intervened when she twirled too close to the candles.

That night, as we collapsed into bed at the hotel, Maddux sighed, “This was the best day ever!” (I’m sure Gary and Elizabeth agreed.) 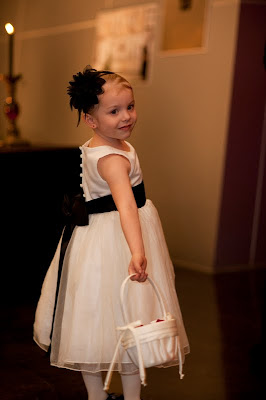 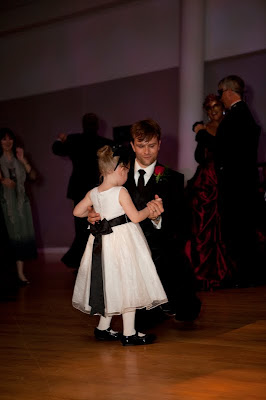 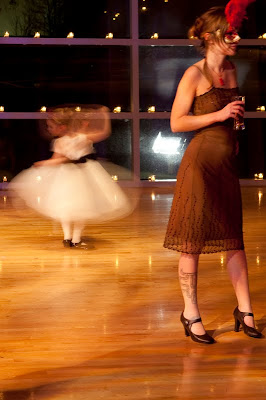