“They” say our identities are fully formed by the age of 3. And funnily enough, 3-year-olds — at least the ones I’ve known — are often inclined to rename themselves. One child will take on the moniker of his favorite cartoon hero. Another may borrow the name of a favorite food. Sometimes the meaning behind a preschooler’s alter ego is a complete mystery.

I, for instance, happened to have an evil twin named Heathera, upon whom all my misdeeds were blamed. This Heathera ran about besmirching my good name — playing with things she wasn’t supposed to, making terrible messes and torturing my brothers. (I’m reasonably sure she opens packets of instant oatmeal over the freshly-cleaned cooktop every morning, too, so get off my back, Chris.) Yes, the standard set for my progeny was pretty high to begin with.

Then, the inimitable Maddux was born. Our fearless daughter is not one to concoct imaginary evil twins. Oh no. She had darn well better get credit for her dramatic and inventive misdeeds! And thus, at the tender age of 2, our mild-mannered toddler became the supervillain known as “Chaos.”

That’s right. As she jumped from couch to couch, strewing a wake of broken “babyproofing” gadgets in her path, she would recoil at the very mention of this Maddux person she’d once been.

And you know what? We really couldn’t argue with that.

While we’re not really sure where our darling daughter came up with her intimidating (yet completely appropriate) nickname, I have to take partial responsibility for what my son calls himself. Our eldest boy, who plays all the livelong day with giant-wheeled vehicles and hockey sticks, has given himself a nickname that will strike fear into the hearts of … well, anyone that really hates kittens and lollipops and rainbows.

Get ready for it …

My almost-preschool-age son has chosen for himself the rather long title of “The Little Baby Jamesycakes.”

Not Spider-Man. Not Monster Truck. Not even just Jamesycakes, which I could handle. Little. Baby. Jamesycakes. And he says it in THE cutest voice. EVER.

Yeah, he is not going near a playground until we clear that one up.

I called him Jamesycakes a couple times while smothering him with kisses at tuck-in time, as I think moms are entitled to do on occasion — failing to realize that he would associate the nickname with cake, which happens to be his favorite thing ever in the whole entire world. OF COURSE he wants people to think of James and immediately think of cake. What could be better, right?

Well, if you’re James, apparently babies. Little babies. And I have to admit he certainly is a cute little baby Jamesycakes when he hunches his shoulders up to his ears, cocks his head to one side, squints his eyes into adorable little LOLcat slits and says “I the cute little baby Jamesycakes!” in his very sweetest voice. However, I have it on pretty good authority that cute little baby boys who name themselves after pastry get a lot of swirlies and atomic wedgies. So we need to find a nickname that’s slightly less “LOLcat” and more “surviving to adulthood.”

At least you can’t fault the kids on originality. Which is why I’m eagerly awaiting the day Thomas decides that his name just isn’t “him.” What will our youngest boy be rechristened? Will it be something based on his behavior, like Headbutt or Crush? Or will he, too, find inspiration in a favorite food? Perhaps in a few years, our playroom will be ruled by Sushi or Cheddar Bunny. If he’s anything like his siblings, Thomas will choose an alter ego that suits his personality.

So, Headbutt it is. 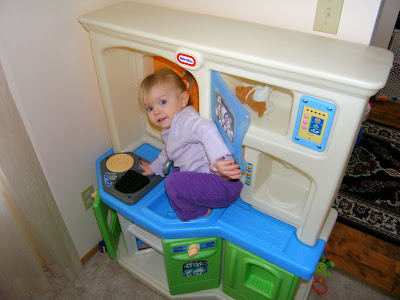