For more than a century, athletes from all over have converged every couple years for the Olympic Games. Sometimes, the games are held in scary locales with creepy, oppressive cultures and corrupt officials — Hitler’s Germany, Soviet-era Russia, Salt Lake City. But this year, the Winter Olympics are but a few hours away in beautiful and friendly Vancouver, B.C.

One of the perks of living a few hours away from the Olympics’ host city is that the torch relay passes through our town. Since it’s not a terribly big city and we weren’t sure when we’d be on the relay route again, we decided to take our kids out past their bedtimes. Just this once.

Since this blog is basically birth control in written form, you are probably expecting this to end badly. As much as I would love to give you a satisfying tale of terrible kiddie chaos and frenzied coffee-swilling madness, I must regretfully announce that there was a minimum of insanity.

OK, fine, James and Maddux both licked the railing on the park bench and Thomas managed to create for himself, in a matter of 2.5 seconds, a handsome cookie beard. There was also the small issue of the single light-up Coke bottle someone handed the kids, so that instead of having some boring conversation with my husband on the ride home, I could spend my time refereeing a heated toy-custody battle. (Luckily, these bottles do not have a very good battery life.)

However, things could have been much worse. Let’s face it; they usually are much worse. Since nobody pooped an entire outfit or split their face open or had a tantrum that attracted stares from a block away, I shall consider our outing a smashing success. The kids bounced around excitedly, Maddux proclaiming early, often, and loudly, in her best Rose-Bowl-parade-announcer voice, “The Olympic TORCH!” (Bystanders stopped looking around for it after about the fifth time.) James also enjoyed playing Official Announcer, baffling those around us with his triumphant shouts of “Da whipping porch!”

While James and Thomas enjoyed the torch relay, they are newcomers to the Olympic scene. Not so Maddux. Our little preschooler has been hosting pretend Olympic games in the playroom since July, often being the only contestant, which lends credibility to her amazing gold-medal streak of some 800-bazillion and counting. She never tires of skipping across the room, giggling in pageant-perfect faux humility as she receives her prize from the invisible panel of judges, and racing back to me proclaiming “I won another GOLD MEDAL!!!!” in a voice so excited it might surprise you to learn it was her 400th GOLD MEDAL!!!! of the afternoon. (Just wait until she learns about Academy Award speeches. She’ll be unstoppable.)

Maddux’ skipping always represents the sport of figure skating, that pinnacle of winter sports for girlie girls. She used to call it “girl hockey” because in a local ice arena where we watched an exhibition hockey game, there was a mural on the wall portraying a female figure skater. After leaving the game, she told me “I want to be a hockey ghoul (this is how she pronounces girl), because I just LOVE their outfits!”

“Really?” I asked, rather skeptically.

“Yes, they are just like PRINCESSES!” my daughter exclaimed rapturously.

“I’m gonna be a figger satyr!” she exclaimed with a squeal.

So a figure skater she is, winning thousands of gold medals weekly. (Take that, Michael Phelps!)

But now that we’ve watched the Olympic torch come through town, James is ready, too. The whole ride home, during his turn to hold the coveted glowing Coke, he held the bottle aloft as if it were the torch itself, yelling as it changed color: “RED!!!! GREEN!!!! BLUUUUEEE!!!! YEYYOW!!!!RED!!!!!!!” (This is always a delightful thing in the car, as James has only the one volume: Super loud.)

So for the boys, we’ll have hockey — or as they call it, sockey ball. (Yes, they realize that sockey ball players use a “puck,” but that doesn’t change the fact that its name is “sockey ball.”) And for Maddux, we will record figure skating. Although we really need to work on pronouncing those ‘K’s and ‘G’s, since nimbly sliding across the tile in the mall in slippery shoes while you’re yelling loudly, “Look, I’m Satan!” tends to draw stares.

Happily, no such stares were drawn last night and we all survived the torch relay — the only casualty being a healthy dinner (unless you believe Kraft’s claims). The next Olympian feat: tomorrow night’s family hockey night with Maddux’ school, in which we will attend a Rockets game right around bedtime. Stay tuned for the exciting sporting action! 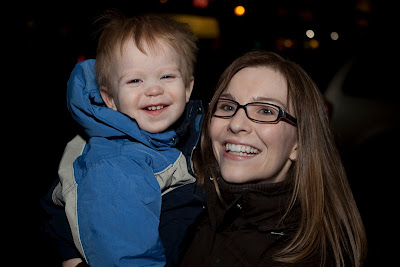 Waiting for the torch