When I was a kid, there was a girl named Kristina who lived down the street. She was a thug and a bully, and at the age of 9 she pronounced the word ambulance, “ambucklance.” But her mom (a teacher) insisted to all and sundry that Kristina was a gifted and wonderful child who would never lie, brawl or harrass smaller children. Because, as parents, we are quick to see the best in our children and are often blind to potential problem areas.

As a kid, I thought Kristina’s mom was either evil or a complete idiot — or maybe both. But now, as a parent who tries to be realistic about my kids’ strengths and weaknesses yet often finds her perceptions failing to jibe with reality, I can view that deluded neighborhood mom’s situation with a little more empathy. She was just seeing her child through “mom goggles.”

We’ve known for awhile that James is not like other 3-year-olds. We knew he wasn’t like other 2-year-olds, and before that, other 18-month-0lds. He lost speech and lined up toys. He filled his excavator buckets with spit bubbles for what seemed like hours. He refused to wear a jacket even at -20 degrees. He was so late learning to walk that we nearly consulted a doctor about it, and when he did learn, he split his face open on a regular basis because he never put his hands out to catch himself. Yet he was always doing just enough to get a passing grade on the developmental checklists.

When he finally began speaking sentences regularly, around 2-and-a-half, his speech was repetitive, loud and monotonous. Often, when asked a question, he’d just state it back to us. There were meltdowns — not just toddler tantrums, but panick-stricken, I’m-going-to-die-imminently meltdowns — based around clothing, shoes, new situations, dirt, grass, you name it. I resolved that if our doctor did not agree to refer James for an autism assessment at his 3-year checkup, I would find a new doctor.

Of course, developmental delays and neurological differences are much easier to spot in a 3-year-old than in a prematurely born 18-month-old. James was immediately given a referral for an assessment. Unfortunately, the referral was to the most popular pediatrician in the area, who seems to be on vacation all the time. His office staff got back to my doctor’s receptionist last month, a mere four-and-a-half months after the initial call, and told her there was a year’s wait. And then, after the year’s wait, he might be referred to yet another doctor. (Austism experts are in such high demand, both in Canada and the States, that this will be a familiar refrain for parents dealing with autistic spectrum disorders.)

So now we’re going to a new, less-popular pediatrician, and have an appointment for later this month. My doctor’s superstar receptionist has been calling everywhere on James’ behalf, and discovered that the second doctor we’d eventually see would likely send James to a special network that refers kids to all kinds of early-intervention programs (after the two years of jumping through hoops, of course!). So she had our doctor refer James himself, saving us the two-year wait for a referral to the program.

Not one to sit on my hands and wait for my little boy to age out of the early-childhood programs, however, I had also contacted the Ministry of Children and Family Development, which provides assessments for kids who show signs of developmental and neurological disorders. And, pretty much the moment I hit “save” on James’ online form, we got a call from the woman who screens children for autism, telling us that James sounded as if he needed early intervention and that since there was a wait for preschool-age children and he’d been premature, that he could get an open spot in their infant program (which goes to age 3). All we had to do was go in and let her meet with James.

Normally, when you introduce your kids to people, these are the thoughts that run through your head:
“I hope he doesn’t have a tantrum.”
“I hope she is polite.”
“Please don’t let him punch her in the throat when she tries to shake his hand.”

But when you’re taking a kid in for an autism assessment — a kid whose preschool teacher has suggested applying for a classroom aide because his social skills and motor coordination aren’t even close to that of your average preschooler — you just hope she sees what you and those close to your child see. (Especially after a year and a half of being told “It’s just too soon to tell whether this is autism or delays caused by being premature.”)

And even as I brought him in, there was always the lurking suspicion that my little boy was so high on the spectrum that his autistic traits might be dismissed with a wave of the hand.

Yesterday was our appointment. I canceled the gym and we headed out with the kids. Chris had volunteered to drop us off so I wouldn’t get lost in the jumble of one-way streets downtown, and he took the other kids to pick up Timbits while James and I visited with the early-intervention clinician.

After a terrifying elevator ride (for which I forgot to prepare James), we entered the office and met with the assessor. I filled out questionnaire after questionnaire, while James found a basket of vehicles and immediately retrieved the sole digger.

In autism-speak, diggers and other heavy equipment are something on which he “perseverates,” meaning that he is completely obsessed with them.

“Well, he doesn’t have any problem with eye contact,” the assessor noted cheerfully. My heart sank. James is always smiling and making eye contact, and despite having so many other traits that would almost certainly put him on the spectrum, he is not discernably different until you try to have a conversation with him.

James played with vehicles and helicopters the entire time. Except when he noticed dirt on the floor. Then he carefully scooped up every stray piece of sand from beneath the clinician’s sand-play table and helpfully deposited it in her hands.

“Now THAT,” she told me with a wry smile, “Is not developmentally appropriate. At 3, we expect children to be using a little broom or suggesting a vacuum.”

And indeed, it occurred to me that, when she was 2, Maddux had begged for cleaning supplies for Christmas. And that she hadn’t handed me dirt since she was about 14 months old. Even Thomas doesn’t hand me dirt. I felt a little more validated in my concerns about James.

Then the screener took a quick look at one the forms I’d filled out.

“Well, James’ lifetime Social Communication Questionnaire got a score of 25,” she told me. “Anything above a 10, we recommend an evaluation — and 15 is the cutoff for autism. This isn’t a diagnosis, just a preliminary assessment, but James definitely meets the criteria.”

Even though I had known he would easily meet the cutoff, my heart dropped into my stomach. In my motherly disconnect from reality, I had still grossly underestimated the amount by which he’d blow the cutoff out of the water. This wasn’t an Asperger Syndrome score. This might be closer to an adult-daycare score. The rest of the meeting was a blur as I filled out yet more forms for seemingly every early-intervention program and tool in the province’s arsenal.

All I could think as we finished the visit was, “How could I have ever doubted there might be something really amiss?”

The clinician must have noticed my numb expression, because she leaned over and said reassuringly, “Don’t worry. This is his lifetime score, not his current score. He’s obviously come a long way in the last little while, which is a really positive sign — and the early intervention will help.”

So, we still have no official diagnosis in hand, and won’t for at least a month or so. But James is now in the queue for physical therapy, occupational therapy, speech therapy and a host of other services available for children with autistic spectrum disorders.

I feel relieved and validated on the one hand, because my instincts were not wrong — James is a child who requires a little extra help in many areas, and now he will be able to get it. On the other hand, I feel foolish for thinking it was possible my son’s case was so mild that he could fall through the diagnostic cracks.

OF COURSE a 3-year-old should not be screaming blue murder for a half-hour at the prospect of wearing school clothes. OF COURSE it’s abnormal for a kid to spend an entire naptime creating an impressive tower of spit bubbles at the foot of his bed. OF COURSE it’s not too much to expect to be able to have a real conversation with your average preschooler.

I’m so used to looking at James through “mom goggles” that it’s difficult for me to accept how very unlike other children his age he actually is. While they are impressing the teacher with their phonics knowledge, James is running away from proffered handshakes (or worse yet, doing his signature throat-jab). He won’t hold a pencil. He sits backward at rectangle time. And despite repeated admonitions, he doesn’t see why oscillating his hips like a sprinkler while he pees is not as amusing to his parents and teachers as it is to him.

So now I’ve had to take the “mom goggles” off and gain some realistic perspective on James’ development. Don’t get me wrong. I’m not going to join the fund-raising pity party at Autism Speaks and tell everyone how my child makes me want to drive off a bridge and has Ruined My Life. No matter what his challenges may be, James is a treasure rather than a burden. He’s the same sweet, sensitive, dry-humored, eager-to-please, dump-truck-loving boy he was two days ago. But in order to help him navigate school, and life in general, I need to acknowledge that he faces significant difficulties in certain situations, and that he will need at least a few accommodations and coping strategies in order to survive a world full of people who don’t share his particular neurological structure.

However, I will point out that, unlike that bratty neighbor girl, James has not yet told a deliberate lie, and he can pronounce ambulance at least as well as Kristina could. 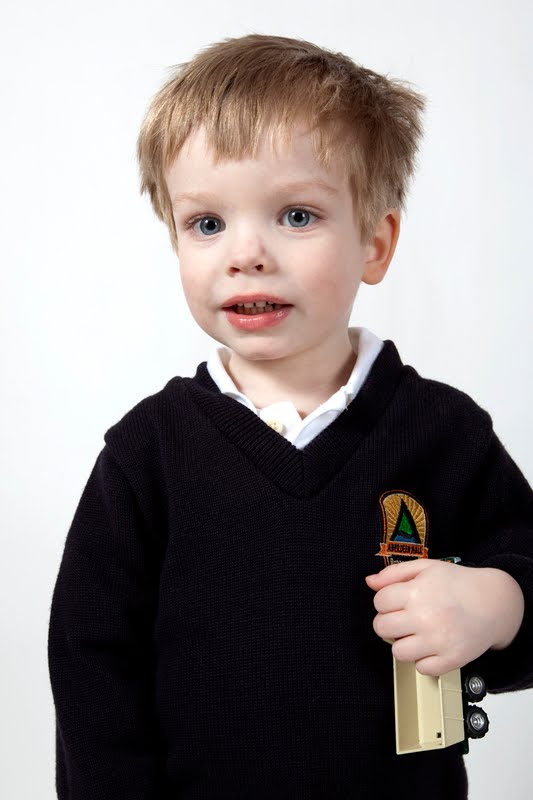 Did I mention he REALLY LIKES construction vehicles?