Firstborn: Mom, I’m going to South America to help build a school for orphans.
Mom: Well, your Aunt Mildred’s friend Bessie’s minister said that 10 years ago, some teen-agers nearly fornicated on one of those trips. I don’t feel comfortable sending you into that kind of environment until I know exactly where you’re going, who’s supervising, and who else is going. Also, I’m implanting you with a subdermal GPS chip. And LoJacking your underwear.

Mercifully, Thomas is decades away from partying with half-men, but he still gets away with plenty. All he has to do to get out of trouble is blink innocently, cock his head, and ask — as if surprised and horrified — “I being bad?” Last night, as I stood sentry at James’ door, it occurred to me that even the middle child has it exponentially easier than the eldest: I was playing bedtime prison warden when Maddux was just 18 months old.

Despite the carefree existence a youngest child enjoys, there are tradeoffs. Only now, as a mom, am I keenly aware of how many achievements are overshadowed, how many activities missed, how many pages left blank in the baby book. (Note to self: Buy baby book.)

Maddux gets plenty of blog entries. She’s the eldest and hits all the exciting milestones first. Before this blog, there was her baby blog, and before that, my pregnancy blog. Both are chock-a-block full of weekly posts and pictures. James had a few entries, but his blog was nothing like Maddi’s. Thomas’ personal blog had two posts: One said “I’m pregnant” and the other said “Baby’s out.” And even in this blog, which I started so the boys would be included in more posts, Thomas is rarely the star. His last post was in April. Whether it’s walking, talking, or destroying a room with poop, someone’s done it before.

Until recently, Thomas also got short shrift on activities. When Mads was a baby, she went to Baby Talk, playgroup and library sing-a-long. Later, it was ballet, soccer, gymnastics and swimming. James had a few Music and Movement classes, but he screamed at the top of his lungs and clutched his die-cast school bus the entire time. We decided large, noisy classes were not his cup of tea. And it seems we got so used to avoiding activities for James that his little brother got lost in the shuffle. Besides a few seasons of swimming classes, Thomas had nothing until this winter’s Music and Movement classes. And we only signed up for those because they were held at his siblings’ school, right after drop-off time, and I would have felt guilty missing them to go to the gym.

So now Thomas has classes. He feels very grown-up and toddles into the music portable with a little backpack on his shoulders. (Then he makes a break for the drums and tries to destroy everything. He is, after all, a lastborn child and has a reputation to uphold.)

In the interest of unabashed bragging highlighting more of Thomas’ achievements, I should also tell you that he knows the phonics sounds for at least half the alphabet, can count a bit and identify several numbers, is maybe two-thirds potty-trained and can sort of use chopsticks. He likes to shout out the answers to James’ homework before James can open his mouth. Oh, and Thomas is an old hand at the iPhone. Or, as he calls it, his iPhone. Yep, he’s a youngest child. No doubt about that.

On the social front, Thomas is a very friendly fellow. We are not sure who to blame for that, but it is what it is. His sometimes-playmate Ayden still regards him with faint suspicion after a particularly enthusiastic tackle hug this fall.

Even the grown-ups aren’t safe. Once Thomas has spent time with an adult more than once, he feels free to run up and hug that person’s leg. If he is picked up by someone who does not have a scratchy beard, kisses aren’t out of the question. Today, he ran up to the head of school squealing, “Hi, Mr. Grieve!” and then wrapped himself around Mr. Grieve’s knees. (FYI, Thomas has not spent significant amounts of time socializing with the headmaster, unless you count the time he was in a Santa costume and Thomas teleported into his lap from across the room in .005 seconds.)

That’s our youngest, in a nutshell. Thomas may not get our undivided attention, but he can wheedle a snuggle out of us — anytime, anyplace. He’s a smart, humorous, gregarious little guy. He likes to tear pages out of books (still!!) and scribble on nonwashable surfaces, and he sometimes slugs siblings or pulls hair, but he always apologizes in the cutest way possible.

One day, the kid will be a great influence on Charlie Sheen. 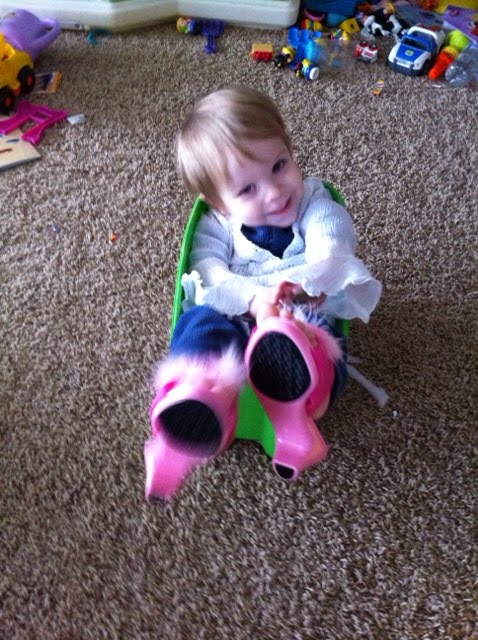 Everything about this picture is completely normal