James has spent most of his life being different from other kids in myriad ways. When he was smaller, many activities left him overstimulated, screaming and clinging to his favorite die-cast toy bus. Things such as jackets, new shoes and his bed being placed a quarter-inch “off” resulted in 45-minute meltdowns. He didn’t really seem to understand or care about what people were saying. But the thing that stood out most about James was his speech.

Until he was a bit older than 3, James hardly ever put more than two words together. When he did speak, it was usually during his bedtime story, when he would expertly parrot exactly what I was reading, as if on a two-second delay. Once he learned to express himself, he compulsively said the last consonant of most words three times. (Example: “Maddux-x-x wearin-n-n’ pants-s-s.”)

Last spring, he had a speech evaluation. Predictably, he was referred for speech therapy, although the waitlist was many months long — in fact, we still have not been called in for speech or occupational therapy.

I’m not really fond of waiting. (Shocking, I know.) So I researched a few approaches and decided on Stanley Greenspan’s Floortime model. In Floortime, you begin by simply observing how the child plays, then engage in parallel play with the child. Once you’ve tricked your poor, unsuspecting kid into letting you play with him, you encourage expressiveness and interaction. Soon, you can introduce directions and turn-taking.

Since I’m no therapist and playing with a bossy, tantrum-prone 4-year-old makes me need about a dozen tequila shooters frustrated, we’re still working on turn-taking and directions. With a lot of guidance, he can sort of play Hi-Ho Cherry-O. For about five minutes. But gone are the days when James lorded over his train table and beats interlopers about the head with Sir Handel.

A good chunk of James’ progress coincided with his entry to preschool. The Montessori curriculum depends a lot on routine, which James loves, and teaches independence, which James needs.

Not only is he improving socially, but we’ve noticed he can finally participate in a decent approximation of a conversation (providing he’s not over-tired, at which point any question will be answered with a defiant: “I DON’T WANNA [fill in the blank], YOU POO-POO ROBOT HEAD!”)

So great have been his strides that, this Wednesday, the woman who evaluated his speech last year was blown away.

A little less than a year ago, James’ speech was coming along, but he mostly echoed others or narrated rather than actually interacting. He had only just begun pointing to things when asked.

This year, he used excellent eye contact (to be fair, he’s always done this), engaged the evaluator, participated appropriately in adult-led play, and when the evaluator dumped 10 blocks on the table, he told her, “You take these four and I’ll take these six,” almost before they were out of the box. (Although now that I think of it, didn’t Dustin Hoffman’s character in “Rain Man” do that with toothpicks? Hmm, maybe that’s a poor example.)

James has gone from being a kid with unintelligible speech, consisting mostly of echolalia, to being able to identify all his colors, numbers and phonics sounds. He identified the crying baby among the happy babies in the evaluator’s flip-chart — a big deal considering his preliminary diagnosis of PDD-NOS in October.

At the end, the evaluator said he has very few red flags for autism, speech-wise. There are still issues for the pediatrician, such as his spells of absence and the outrageous tantrums and the pants-pooping and the fact that he sometimes stays up ’til 1:30 a.m. But the good (bad?) news is, he probably no longer needs the speech therapy he was referred for and still hasn’t gotten. Yay. (Pardon me if I’m a bit bitter about the slow access to autism-related services after nearly three years of trying to get help for James.)

Cognitively, James is at or above age level. Speechwise, he’s just the tiniest bit behind his peers. We just need to work on talking about abstract ideas.

And that poo-poo robot head thing. 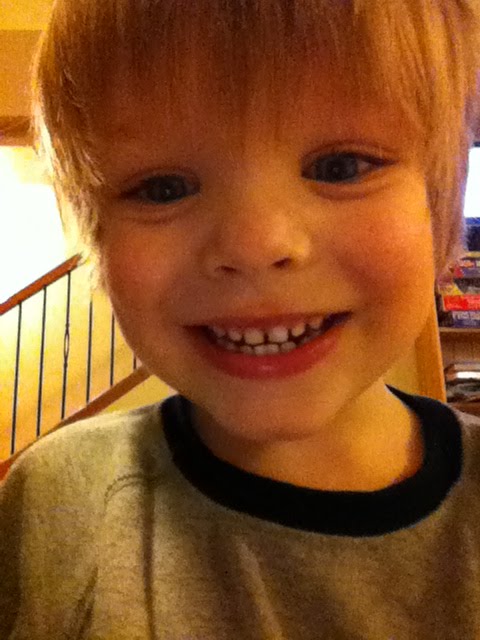 Who has two thumbs and can (sometimes) smile for the camera? This guy!