Today is Autism Awareness Day. You’d think that every day around our house would be Autism Awareness Day, but, strangely, that’s not really the case. We’re all so used to James that most of the time, he’s just another member of the family, not “the one with autism.” So, just as we know to keep an eye on Maddux if she’s arisen before 6 a.m., not to put condiments on Thomas’ food and not to change Henry’s diaper without occupying his hands with a toy, we know not to ask James to wear jeans or surprise him with a hug.

When we go out in public, though, we’re forced to see James through other people’s eyes — and that’s where awareness comes in.  Last Monday, James attended his first “big kid” karate class. There’s a lot of rapid-fire instruction. There’s an assumption of basic physical coordination. James has trouble processing complex instructions, and his body becomes stiff and awkward when he’s trying out new movements. Last week, he seemed utterly lost until the sensei assigned a specific instructor to guide him through all the motions as if James was a gangly little marionette with one hand jammed permanently in his mouth (a sure sign he’s nervous).

But this Monday, when we arrived at karate, it was completely different. Halfway through the class, James figured out the connection between the verbal commands and the karate stances, and, while he appeared to be on a two-second delay, he put all his concentration on trying to keep up with his classmates. He only had to be posed a dozen times (instead of constantly for the full hour) and even landed a kick or two on the paddles. Performance-wise, he still trailed the other kids, but effort-wise, it was obvious James was giving karate his all. In sports, the end result matters a lot — a kid who struggles just to participate can get lost in the shuffle. But to my amazement and pride, when James and Maddux piled into the car, Maddux announced, brimming with glee, that James had been named “Hardest Worker,” a weekly honor which she greatly covets. So often, people don’t notice all the hard work James puts into what he calls “not being weird.” The fact that someone else who barely knew James noticed him giving his level best and rewarded his efforts — rather than comparing his achievements — nearly brought me to tears in the parking lot of the Y.

We still get stares at parks and grocery stores, and sometimes from other parents at school or activities. But, thanks to the growing awareness of Austism Spectrum Disorder, there are so many people who see James as a person rather than a set of weird behaviors and social differences.

Thanks to his kind, cheerful, insanely patient speech therapist from two years ago, who tailored the therapy to James’ specific needs (even though he was only there for speech) and made it possible for him to have meaningful conversations with people, observe their facial expressions and identify emotions in himself and others.

Thanks to those rare, wonderful children who are compassionate to the “different” kids rather than taking advantage of their deficits in social awareness. James may not understand other kids’ emotions in a specific moment, but he does understand acceptance and rejection. Rejection happens a lot, because kids are kids. And when James has been accepted on play dates, invited to birthday parties and been high-fived and called a “rock star”, he’s spent the next several days giddy with joy. Big thanks to the moms and dads of those children as well, because compassion is a learned behavior!

Thanks to James’ teacher, who’s been working with him since the beginning of the school year — four months before his official diagnosis. She’s developed rewards, reinforced our “breaks” and deep breathing, and worked with the resource teacher on a social-awareness curriculum, which the school kindly provided despite the non-diagnosis. We weren’t sure James would last a week in regular kindergarten. Yet here we are, with just three months to go before year’s end.

Thanks to the grandparents, aunts and uncles who shower James with love despite the meltdowns, some occasionally obnoxious behaviors and the uncertainty that he’ll reciprocate the hugs and “I love you”s — or even say “hi” if he’s busy with his Lego. He’s working on those hugs and gets better every time!

To Chris, who didn’t want to believe James was different but humored me when I demanded evaluations and doctor visits, and has been there both to console me when it’s been overwhelming and give me a reality check when I expect too much of James (how the tide has turned!).

It’s hard to say where kindness ends and “awareness” begins, but I like to think that a little bit of knowledge about neurological differences helps people process some of James’ quirks. I’m grateful to those who know about James’ differences and accommodate them. And I’m gobsmacked when perfect strangers overlook James’ deer-in-the-headlights expression and obvious speech differences and give him “kudos” in front of his classmates.

Yesterday I was surprised by the karate instructors’ perceptiveness and compassion. Today, I want to thank those of you who have made James feel like a regular kid, and ask those who stumbled on this blog somehow to do the same for a person with autism in your lives. These moments are few and far between, but when they happen, well, that’s the stuff that keeps us going! 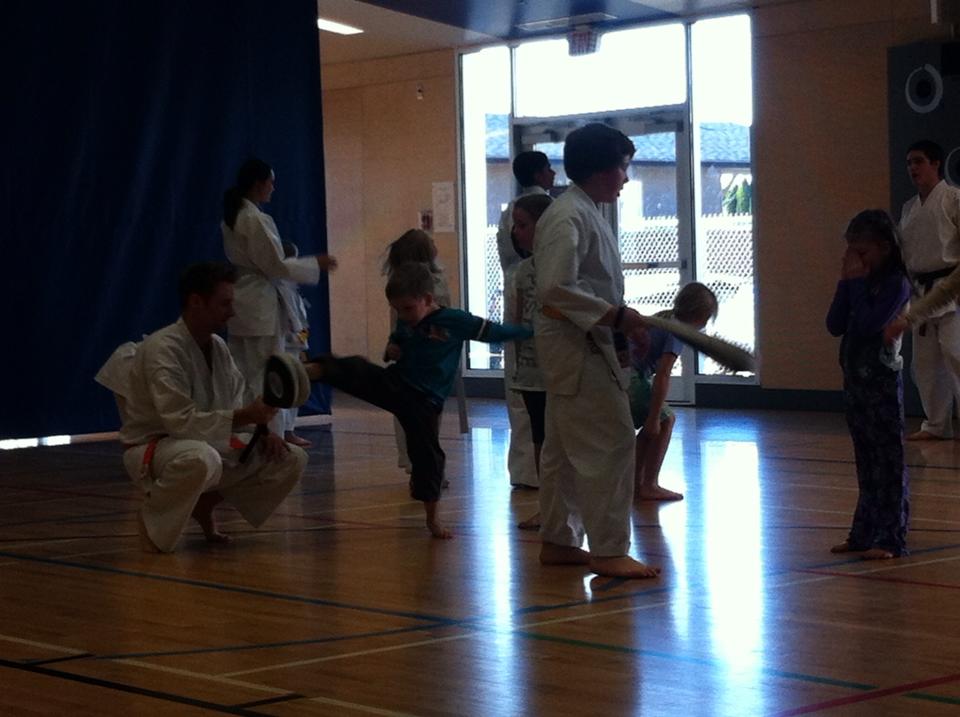 Kicking the paddle — his favorite part! 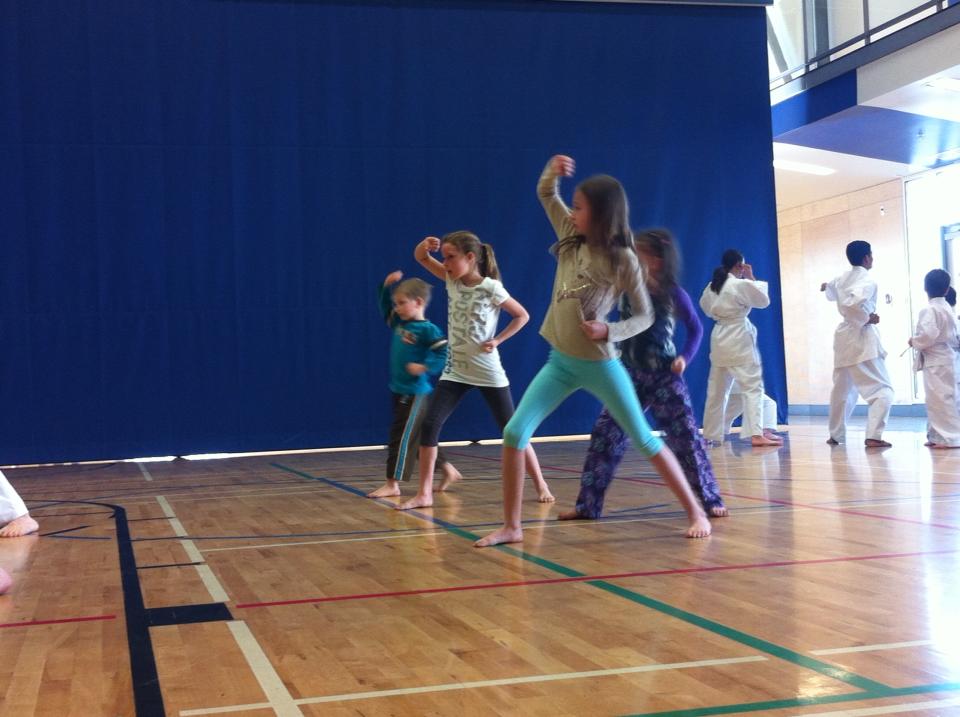 Keeping up with the beginner class!