Dear, sweet, adorable little Henry is making up for lost time, it would seem. And this should probably be no surprise. After all, his first project upon achieving upright status this past winter was determining how our doorknobs worked. Had he realized how useful mobility is to aspiring hooligans, I’m sure he would have commenced walking months sooner!

Henry took his first steps in the middle of May and began walking in earnest on June 6 — as if on cue while I was videotaping, no less, because as every child of the 21st century knows, photo or it didn’t happen. You know he’s got spunk when the fourth child manages to score a family “first.”

He’s already an accomplished stairway mountaineer, and like any adventurer, he’s always looking for the next challenge. Having conquered all the easier climbs in our house (steps, kid chairs, train table), he apparently set a personal goal to beat the clock and summit everything in our house (and yard) before he hit 18 months. So, in the past few weeks, I’ve been retrieving him from beds, couches and tabletops.

About a week and a half ago, he scaled the plastic “rock wall” on our Little Tikes climber to much fanfare. Perhaps too much fanfare.

The next day, I heard the door to the boys’ room slam shut. Both James and Thomas were accounted for, so I went into their room to retrieve Henry and save him from choking on Lego and tiny plastic dinosaurs. But where was Henry?

He wasn’t rummaging through the Lego bin. The dinosaur habitat lay desolate. He wasn’t around the corner of the bunk bed, pulling stuffed animals out of the giant stuffie container. I must be going senile, I thought. Surely Henry couldn’t have scaled the ladder to the top bunk — in 30 seconds, no less.

As a matter of fact, he could have. And did. There was our adorable, 17-month-old baby (in the third growth percentile, no less), bouncing happily on his knees in his brother’s bed, shaking a stuffed kitten by the neck.

Those of you who have been reading this blog since the Reign of Maddux may recall that we are not strangers to babies with superior climbing skills. Henry is merely carrying on the grand tradition. He quickly graduated from the bunk bed ladder to the more challenging treehouse ladder xo6bduv. He also has the upper-body strength of a monkey and the toes of a gecko, enabling him to climb the stove by using the front handle as a chin-up bar and wedging his toes against various cabinetry and stove appendages. Oddly, he has never attempted an escape from his crib, nor is he scaling change tables … yet. But I am sure this is simply because he enjoys chewing on his crib so much that he has no reason ever to leave that valuable source of splintery, stomach-satisfying hardwood. As soon as he gnaws his way through his furniture, Henry will doubtless be unstoppable.

Soon enough, he’ll be playing “crack the egg” on the trampoline, gamboling about like a mountain goat on building ledges, dangling off the top of the swingset and clambering about on the (forbidden) exterior of the tube slide like the rest of them. We’ll look back and think, “It seems like just a few weeks ago when he was first climbing up the ladder into the treehouse.”

And perhaps it will be. 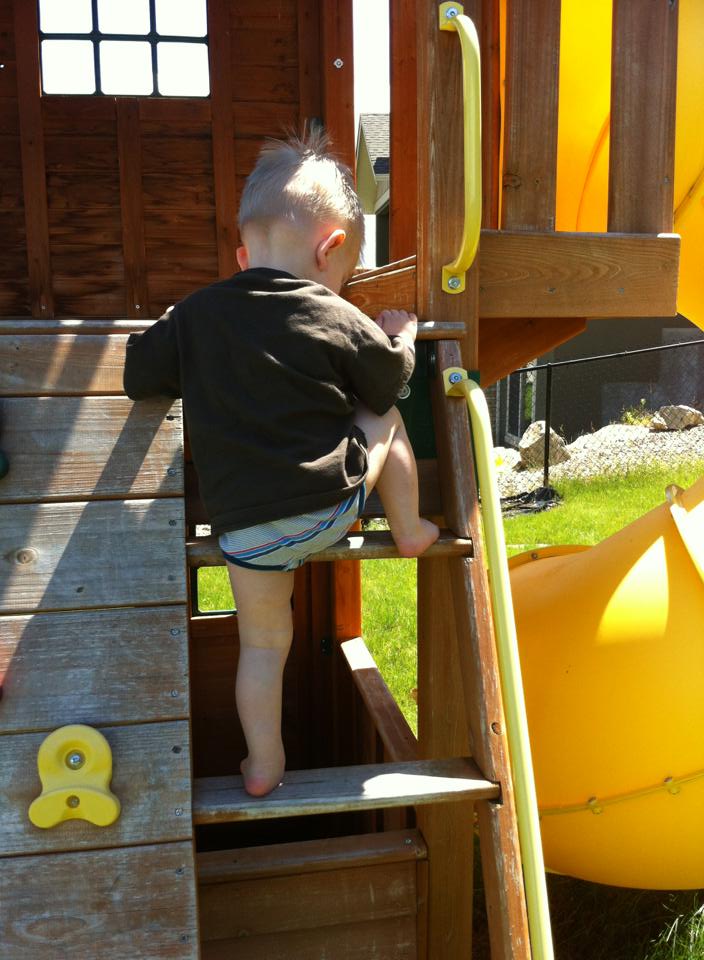