‘Twas two weeks before Christmas, and all through the room Not a creature was stirring, except in my womb; The grownups were nestled all snug in their beds, When baby decided, “It’s time for phys ed!”

One of the greatest highlights of pregnancy is feeling the baby move. Sure, the barfing and the sore hips and the feeling of having your stomach and lungs squashed up into your collarbone are exciting too, but for some reason, they’re just no competition for those first little kicks and punches.

I started feeling some weird tickling a couple months back, and some definite baby movement about three weeks ago. Soon the movement was unmistakable, and now I’m fairly sure I can tell the difference between a punch, a kick and a repositioning maneuver.

The baby is already beginning to fall into the sleep-wake cycle (or lack thereof) it will have as a newborn, but, as anyone who’s woken up to find the covers wrapped around them and the pillows on the floor can attest, that doesn’t matter. Awake or not, the baby moves about 50 times per hour.

I had hoped, since I have (well, had) a very flat tummy, that by Christmastime, Chris could feel the baby’s movements from the outside. Unfortunately, I have an anterior placenta, which is just that much more cushioning for little arms and legs to poke through. So, while I can feel the baby using my uterus as a trampoline in his or her nightly practice sessions for Gymboree as I’m lying in bed, feeling any movement on the outside has proven as elusive as finding that perfect nursery theme.

Until last night. That’s when I decided that, since I have been feeling kicks more strongly on the left side, that’s probably the part that isn’t covered by the placenta.

Having just gobbled down a few midnight snacks thanks to second-trimester super-hunger, I lay on my left side, tummy slightly down because I know the baby hates that and kicks like a little ninja whenever I lie in that position. It took about 10 minutes of futilely chasing stray karate chops and flying kicks, but Pele finally did it!

I had almost given up when I felt a kick from the inside and a minute twitch from the outside. Even Chris was excited, which is a tall order for most people who are awakened from a well-needed sleep by a crazy preggie jumping on the bed and yelling, “I felt the baby move!!!” and are forced to feel a tummy that now is completely still … even from the inside.

But now that it has happened once, chances are it’ll happen more and more often — just like the previous baby movements (and the vomiting).

So while I am trying to keep most of Chris’ presents secret from him, this is one thing I don’t mind saying he may get for Christmas after all.

And here they are: the Week 19 belly shots! 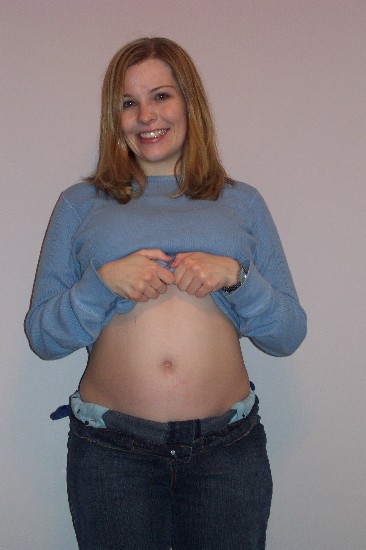 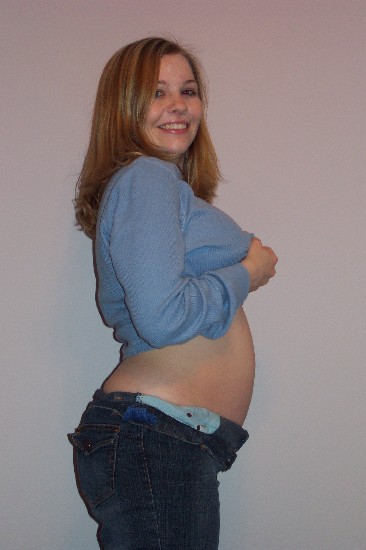